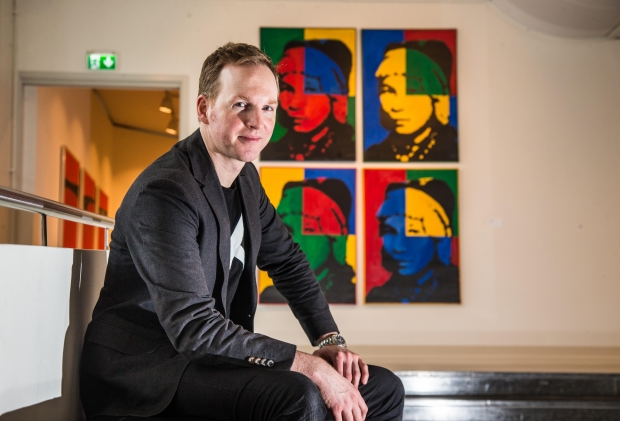 - It was a performance waiting to happen, says director at Nordnorsk Kunstmuseum Jérémie McGowan.

Jérémie McGowan’s first interaction with Sámi culture dates back almost twenty years. As a university student in art and design in his home country, the USA, he was interested in Nordic and Scandinavian design, and took the opportunity to study abroad in 1999.

- It’s just one of those times when life happens to you. Your university has some exchange programs on offer, so suddenly you find yourself in Oulu. I’ve always had an attraction to the north, so it wasn’t really as random as that. And Finland is of course a great place for design, and this led me in turn to engage with Sámi culture as well – another stronghold of really good, culturally-embedded design!

The resulting semester abroad at the University of Oulu’s School of Architecture opened up further opportunities for him, and he got a Fulbright Grant as a professional artist and designer to return to Oulu two years later. This time he was a guest artist and researcher at the University’s Giellagas Institute in 2001-2002 – a specialist Sámi research centre. Working mainly with wood, both furniture and sculpture, he was naturally attracted to duodji as a way of both making and thinking.

- I have a personal affinity for craft, a close relationship to materials and how they function. So duodji feels familiar to me in many ways, that each piece of wood matters. A piece of wood is not just a piece of wood.

The love affair of materials, wood in particular, is part of the backstory to the two knife tables he designed for the exhibition There Is No, now showing at Sámi Dáiddamusea. He also designed the large “frame” housing a selection of duodji works - a favourite amongst many visitors to the exhibition.

During his time at the Giellagas Institute, McGowan learned a lot about Sámi culture, history and politics, both past and present. He had an artist residency in Finland after that, moving to the village of Koppelo between Ivalo and Inari in 2004, where he continued learning what he could.

- I read everything I managed to get my hands on during my time in Finland – majority/minority issues, language and land rights, access to education and healthcare, indigenous self-expression and self-determination, colonial and postcolonical theory, etc. I became rather well versed in the end! I also traveled a lot in Northern Finland, Sweden and Norway in those years, getting to know different parts of Sápmi better.

So that’s the background of things. What’s in his spine and led him towards co-creating Sámi Dáiddamusea. Because seventeen years after his first stay in Oulu he found himself in the position of Director of Nordnorsk Kunstmuseum in 2016. In between he did a PhD in Scotland, and then worked in Oslo as a Senior Curator at The National Museum of Art, Architecture and Design, and an Associate Professor at The Oslo School of Architecture and Design.

- But the Sámi and Sápmi always stayed with me, although it was a bit more dormant for some years. It all came back to the surface when I came here to Tromsø. I reconnected in a way.

When he became director he knew from the outset that Sámi perspectives would play a great part. The idea for Sámi Dáiddamusea came to life after a conversation with Anne May Olli, the Director of RiddoDuottarMuseat in Karasjok. They talked about how the two institutions could collaborate. McGowan was aware of some of the challenges RiddoDuottarMuseat grapples with concerning its art collection, and the lack of a museum building in which to house it. He and Anne May Olli shared the sense that some urgent action had to be taken. What was needed was a critical project from within the world of museums, that would hopefully refocus attention on the key issues at hand.

- The opportunity was kind of hovering there, and the timing was right. It was a creative, partly spontaneous idea that came in reaction to existing conditions, and full respect for previous efforts to make the dream of a Sámi art museum a reality. Everything was more or less on the table. We were working on a re-hang of our collection exhibition at Nordnorsk Kunstmuseum, and were in dialog with RiddoDuottarMuseat about integrating pieces from their collection in that project, which is still ongoing. From its start over thirty years ago, Nordnorsk Kunstmuseum has more or less always had loans from The National Museum on display. So we were thinking to flip that around symbolically – a sort of inverse and slightly scrambled repatriation of objects concept. Why don’t we send some of The National Museum works back south, and substitute those with pieces from RiddoDuoattarMuseat’s collection instead?

The decision to return some of The National Museum loans back to Oslo opened up possibilities for telling different stories, while making a political statement at the same time. It would be a comment on some long-standing north-south dynamics as well. And many of the long-term loans from The National Museum are in any way proponents of a mainstream version of Norwegian art history, which has played a role in the “Norwegianization” of Northern Norway, and in which Sámi have unfortunately had little to no place to date, he claims.

- Part of our role going forward, at least as I see it, is to work earnestly and constructively throughout all of Northern Norway, and to serve its people purposefully through compelling and generous museum projects. To take the North seriously in all its complexity and diversity. The plan of integrating work from RiddoDuottarMuseat’s collection into a presentation of our own collection was an initial tactic to “include”, both literally and symbolically. It is an important step in ensuring visibility and long-term recognition for RiddoDuottarMuseat’s collection and, by extension, Sámi art more broadly. But that in itself is not quite enough. We needed something more – a properly experimental, creative-critical project that would demand recognition.

The resulting performance idea had clear momentum, and just needed to be set in motion. A completely alternative institution was in a sense already there, waiting to happen.

- We decided to go all out and make it a strategically symbolic event. It was crucial that Sámi Dáiddamusea materialized, behaved and communicated as a full-fledged, bona fide museum. Not an exhibition! That’s why the project was largely kept secret, for example, until it emerged “overnight” in Tromsø on 15 February 2017. Because it was conceptually never part of a pre-planned exhibition program, but a very real institution in its own right.

McGowan still clings to his roots in art and design, and self-identifies himself even now as first and foremost a designer – not a curator or art historian. He was involved in the graphic design process for Sámi Dáiddamusea, which was done in collaboration with the Tromsø-based design firm Tank.

- While Sámi Dáiddamusea is of course a critical museum project, I see it largely as a design project as well. Both the X and the exhibition title There is No emerged from the design process - then took on a life of their own in the curating process. X is not just a random letter towards the back of the alphabet. It has a number of different associations and functions: It’s a footnote, for example, pointing to the disclaimer that this project is at least partly a fiction, a performance. It connects to all the “No” and “Not allowed” signs we have in society, and thus communicates a clear message: No parking, No go zone - No museum. It also acts as an intersection, a crossroads. It marks a place where something is, where something happens, or might be found, McGowan says, and finishes:

- X is also a symbol of erasure, editing and self-effacement. As a logo it is fittingly generic – a non-logo of sorts – and appropriately self-cancelling. It crosses out Nordnorsk Kunstmuseum, crosses out itself, and then sketches out a possible Sámi Dáiddamusea instead.